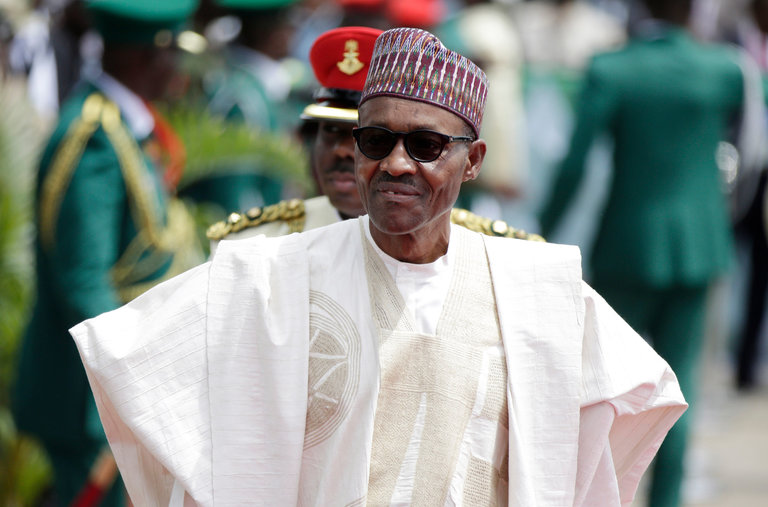 President-elect Muhammadu Buhari of Nigeria arriving for his Inauguration in Abuja, in May. Credit Sunday Alamba/Associated Press

In April 2015, Muhammadu Buhari became the first opposition politician to defeat a sitting president in Nigeria, in a mostly free and fair election. Mr. Buhari, a former army general, who ruled Nigeria for 18 months from 1983 to 1985, had a reputation for being incorruptible and a disciplinarian.

When Mr. Buhari returned to the Aso Rock presidential villa, Nigerians were disgruntled by reports of widespread graft by government appointees, and public services were on the decline. His election was supposed to usher in change, but less than two years later, he has been acting as if tending to the country’s needs should come on his own schedule.

On Jan. 19, Mr. Buhari left for a 10-day holiday to London; it seemed odd to leave the warmth of Abuja for the misery of English winter. By early February, Nigerians were told that Mr. Buhari had extended his trip for unspecified medical tests. No return date was given. Who can begrudge a 74-year-old the medical tests he is said to be undergoing in London?

If only Mr. Buhari had invested in the human resources and infrastructure required to conduct such medical examinations and treatments in Nigeria. Every year around 60,000 Nigerians seek medical treatment abroad, mostly in India and Dubai. Women who have a choice will spend every penny for maternity services abroad. People in Lagos openly talk of hospitals rationing supplies for those who have to go there.
When he first took the reins of government from Goodluck Jonathan, who governed during an oil boom, Mr. Buhari lamented that he found an empty treasury, that Nigeria faced millions of dollars in debt and wasn’t even able to pay civil servant salaries.

As Africa’s largest oil producer, Nigeria was hit hard by the global collapse in oil prices; crude is responsible for more than 90 percent of its exports and 70 percent of its government revenues. Oil prices plunged sharply, from close to $100 a barrel in 2015 to about $70 a barrel now, after recently climbing again.

The measures Mr. Buhari took to reduce Nigeria’s dependence on oil may yet yield fruit. He has emphasized expanding agriculture and reviving a gargantuan but dormant steel manufacturing plant, linking it by a railway line to iron-ore mines, ports and customers.

Even though the president relented a bit by easing restrictions and allowing market forces to determine the value of currency, “Buharinomics” hasn’t made life easier. For a time Nigerians couldn’t even use debit cards abroad. Of course, stock markets tanked. Today you can get five different exchange rates in one day. Thousands of Nigerians have lost their jobs.

The International Monetary Fund estimates that Nigeria’s economy under Mr. Buhari’s leadership has fallen to its worst levels since the early 2000s, with a 15 percent drop in gross domestic product. Yet there lies some hope, with the I.M.F. predicting 0.8 percent growth this year.

But power supply remains erratic; the prices of rice, kerosene and bread have gone up; and tens of thousands of young people remain unemployed. Inflation and recession are constant conversation topics as staples begin to disappear from the dining table. Businesses are firing employees they can no longer afford. And this week anti-government protests broke out in Lagos and Abuja over economic woes.

President Buhari is from the predominantly Muslim north, and the protests erupting among predominantly Christian southerners are a reminder of Nigeria’s fragile ethnic fault line. Things are particularly fraught in the Niger Delta. The area remains impoverished, and past governments, including Mr. Buhari’s in the 1980s, have done little to change that.

Angry militants have been sabotaging and blowing up oil pipelines; Nigeria lost $100 billion to sabotage in 2016 alone. Yemi Osinbajo, the vice president, traveled to the delta last week to establish a truce and soothe tempers.

In the north, the violent Boko Haram extremist group isn’t yet vanquished. As a candidate, Mr. Buhari had promised to tame Boko Haram, and he has reclaimed areas it controlled under his predecessor. In probably his greatest success to date, he has galvanized a demoralized military and pushed the group out of large swaths of the Nigerian northeast that seemed to have been ceded to them by his predecessor.

But Mr. Buhari’s absence has emboldened the terrorist group to unleash fresh attacks near Chibok, where nearly 300 girls were abducted in 2014. Mr. Buhari has also been silent about allegations that the nomadic Fulani herdsmen are raping and killing southerners.

Mr. Buhari should know the effect of his silence. In 2010, President Umaru Yar’Adua left Abuja for medical treatment in Saudi Arabia. He returned months later on life support, to die at home. The secrecy was galling then, and it is now. Mr. Buhari’s phone conversation with President Trump has helped assuage rumors of his death. Yet his refusal to address Nigerians is a matter of serious concern.

Last year, Mr. Buhari went to Britain for treatment of an ear infection. A Lagos businessman tells me many feel he’s back there for the same reason: his inability to hear the voice of the people of Nigeria. President Buhari ought to reach out to the people. Our patience is wearing thin.