It’s where the Grammy-winning artist lives, works, and entertains

In early 2020, Grammy winner Burna Boy had just moved into a seven-bedroom home nestled onto a bucolic estate in Lagos—Nigeria’s creative and commercial capital. His architect, Akose Enebeli, had constructed the two-story Lekki house in which Burna could simply be himself.

But the story of this home, and how it came to be, goes back to 2017, when Enebeli was in the middle of building a 10-bedroom mansion for former Manchester United striker Jude Ighalo, and got a call from an unknown number. Burna’s manager—and mom—Bose Ogulu, was on the other line. She had seen the unfinished residence and decided to cold-call the architect. Flash forward not too much further in the future, and Burna, a superstar Nigerian singer, songwriter, and rapper with multiple homes around the world, was happily “mind blown” when he saw Enebeli’s designs for his own new abode. “He just kept saying ‘wow, wow you’re bursting my brain,’” Enebeli tells AD. Overall, the architect loved the experience of turning an empty housing lot into a spectacular residence, all while getting an enthusiastic thumbs up from his famous client. “This is. . . where I can create,” Burna, whose given name is Damini Ogulu, tells AD. “This is where I made my Grammy album.”

In bustling Lagos, a megacity of 20 million residents, Enebeli’s creation is a serene 13,000-square-foot oasis. The colossal structure has a calming beige and gray façade, complete with all the hallmarks of contemporary luxury living. Inside, it boasts high ceilings, a private cinema, lounges, and a game room. There’s also plenty of garage space and tall windows.

Enebeli and his colleagues made sure to optimize for natural light in the 3,700-square-foot structure, which is divided into two distinct parts. One area houses a recording studio, gym, and bedrooms for guest artists. The other is a more intimate area for Burna. It’s where he entertains his closest friends and where his own primary bedroom suite and private terrace are situated.

The downstairs rooms make for a continuous, free-flowing area, with one interior leading right into the next—sans doors. Of particular note is the main living room, which leads to a massive window overlooking the tended gardens. Overall, the compound evokes the serenity of the lagoons, creeks, and the greenery of the Port Harcourt region, some 384 miles away in Nigeria’s Rivers State, where Burna was born. “I’ve got a lot of Rivers stuff, water sounds,” Burna says. “[It’s] just really water-inspired. It’s peaceful. Nature speaks to me.” 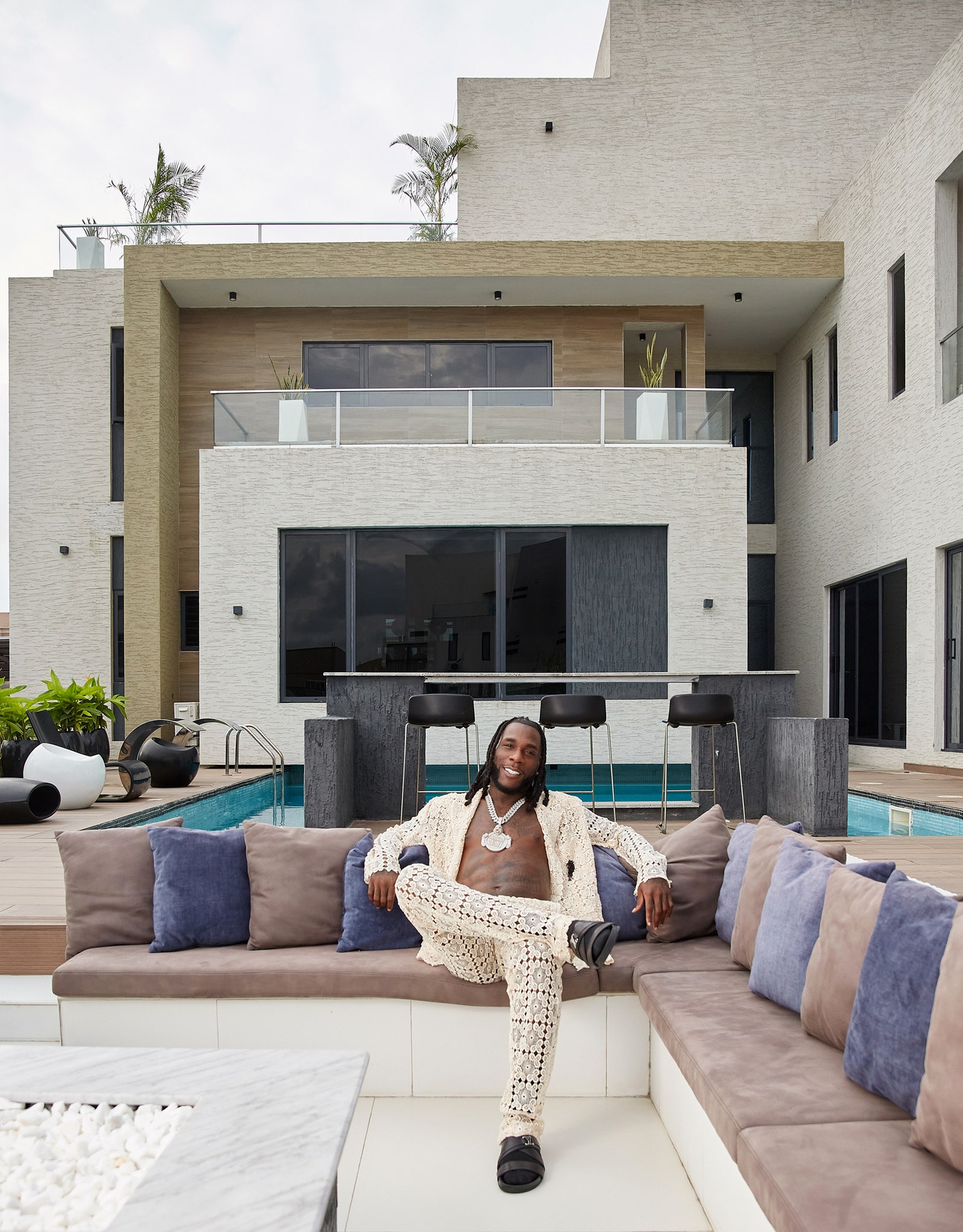 When he’s at home, Burna loves to lounge in his sunken garden. “He’s quite a busy person but when you meet Damini Ogulu, he’s a warm person, and he’s an open person,” Akose Enebeli tells AD. “I used that as inspiration.” 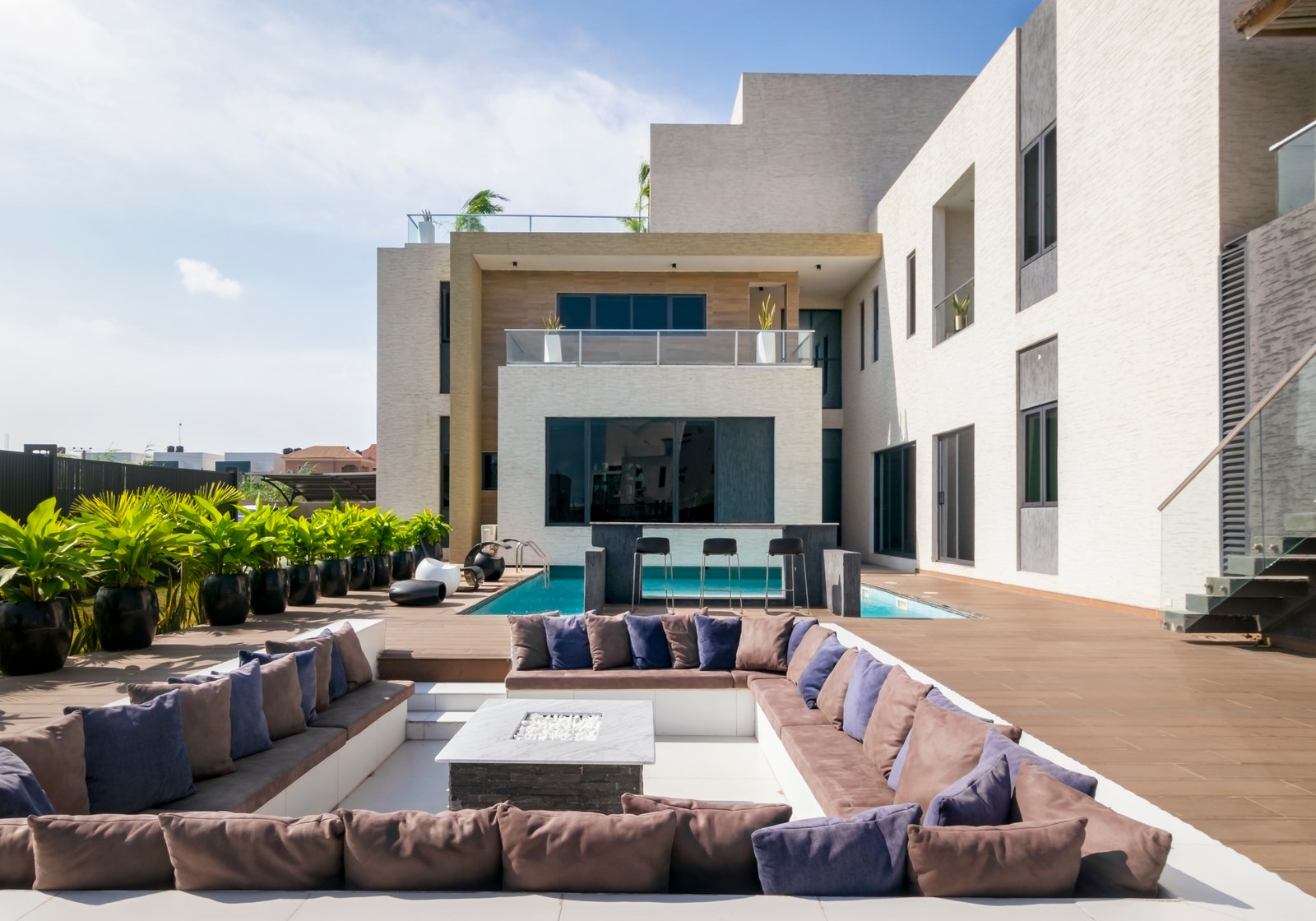 The building is one house with two distinct spheres. “Damini Ogulu can go rest and relax—he has a private cinema [and] several lounges in his living space,” Enebeli says. “Then Burna Boy can go to his studio, record, and have his producers around.” 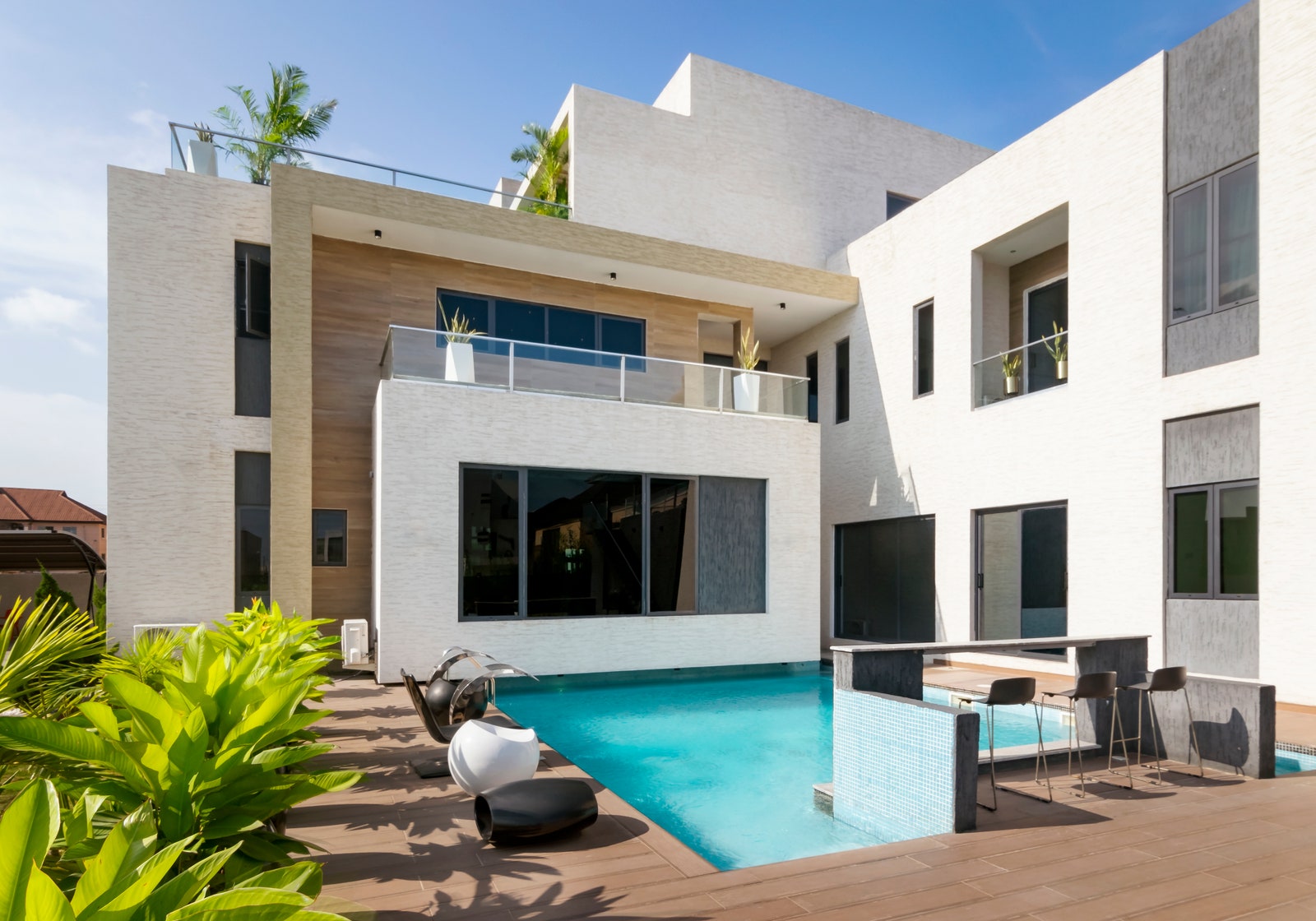 Thanks to a large window in the living room, which abuts the pool area, it’s possible to get a feel for the outdoors while staying in an air-conditioned area. “You have this whole visual continuity,” Enebeli says of the experience.

A fully stocked modern kitchen is essential for the singer and his guests. Burna tries to make the most of hosting when his busy schedule allows. 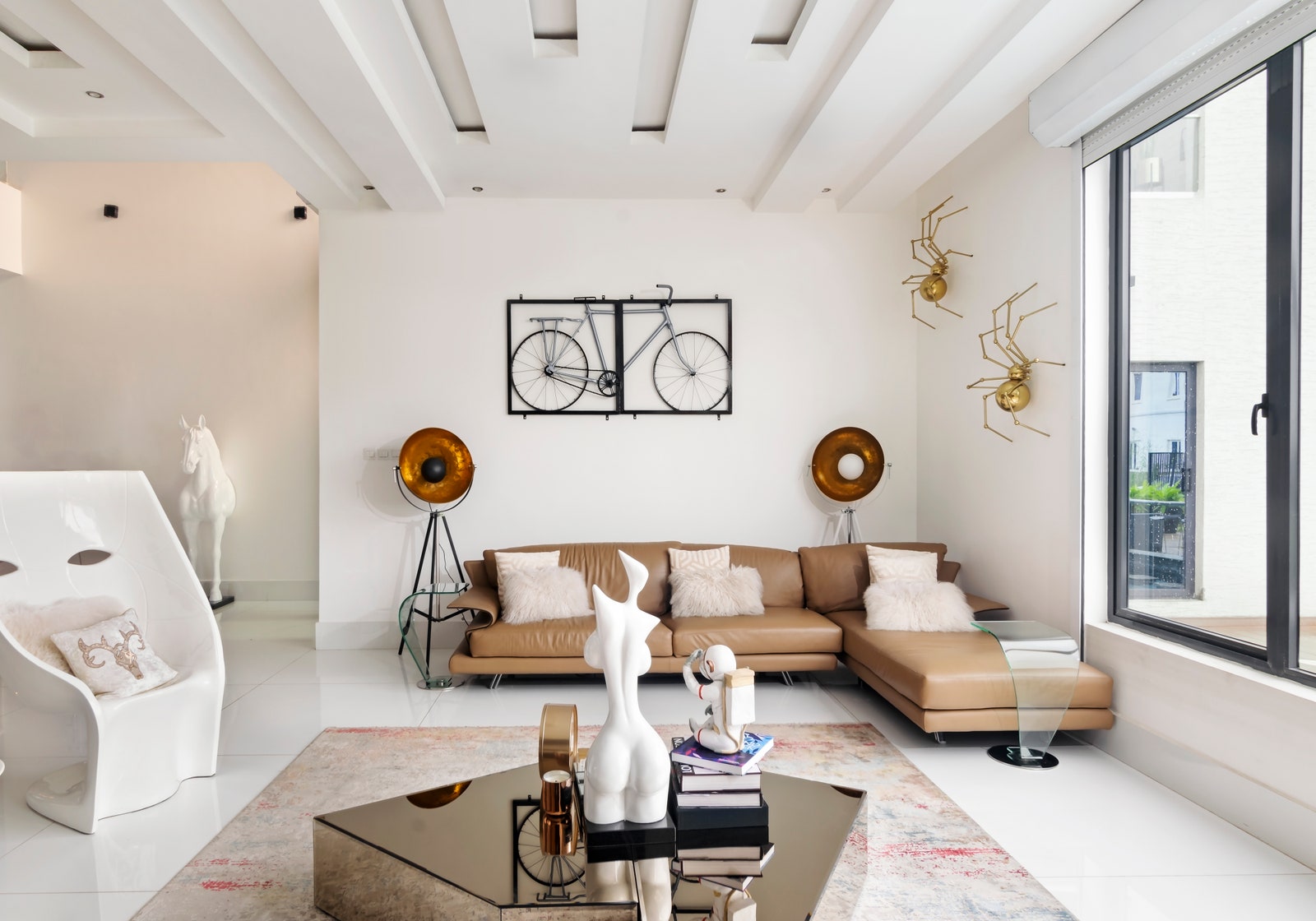 All-white walls were preferred for the inside of the home. Burna acquired the half horse marble sculpture and female bust, as well as the gigantic golden insect pieces, from Lagos’s Throne of Grace. The bicycle art piece came from Atelier 225. 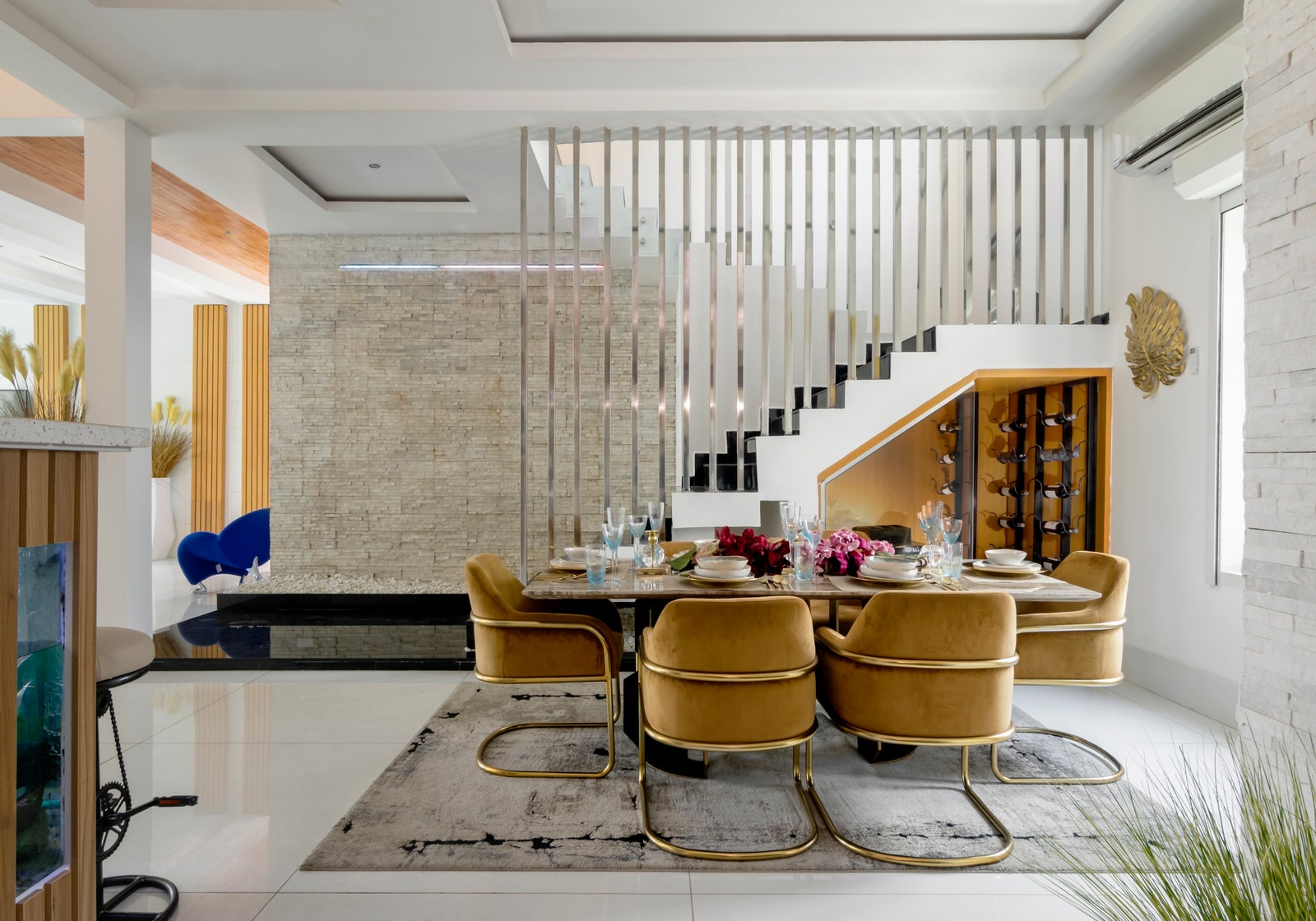 Chez Burna, few rooms have doors, with many areas instead opening up onto one another to create a continuous floorplan.
When friends are over, there’s always room for one more at the dinner table. 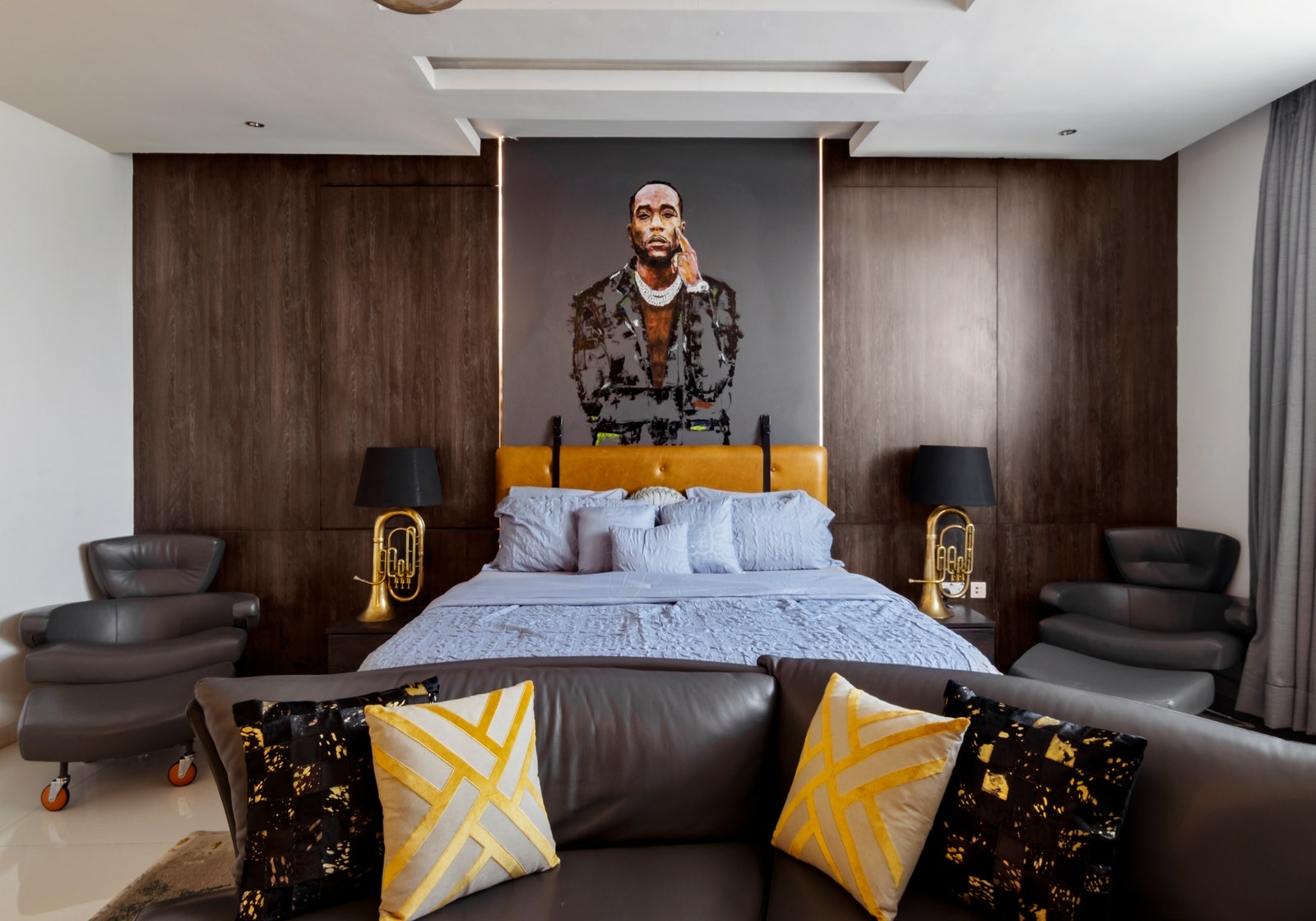 Music and art are never far from Burna’s mind, as inspiration can strike at any time. In his own home, the musician has also taken pains to support local artisans. One example is the inclusion of trumpet lamps from Dulin Gifts in Lagos. 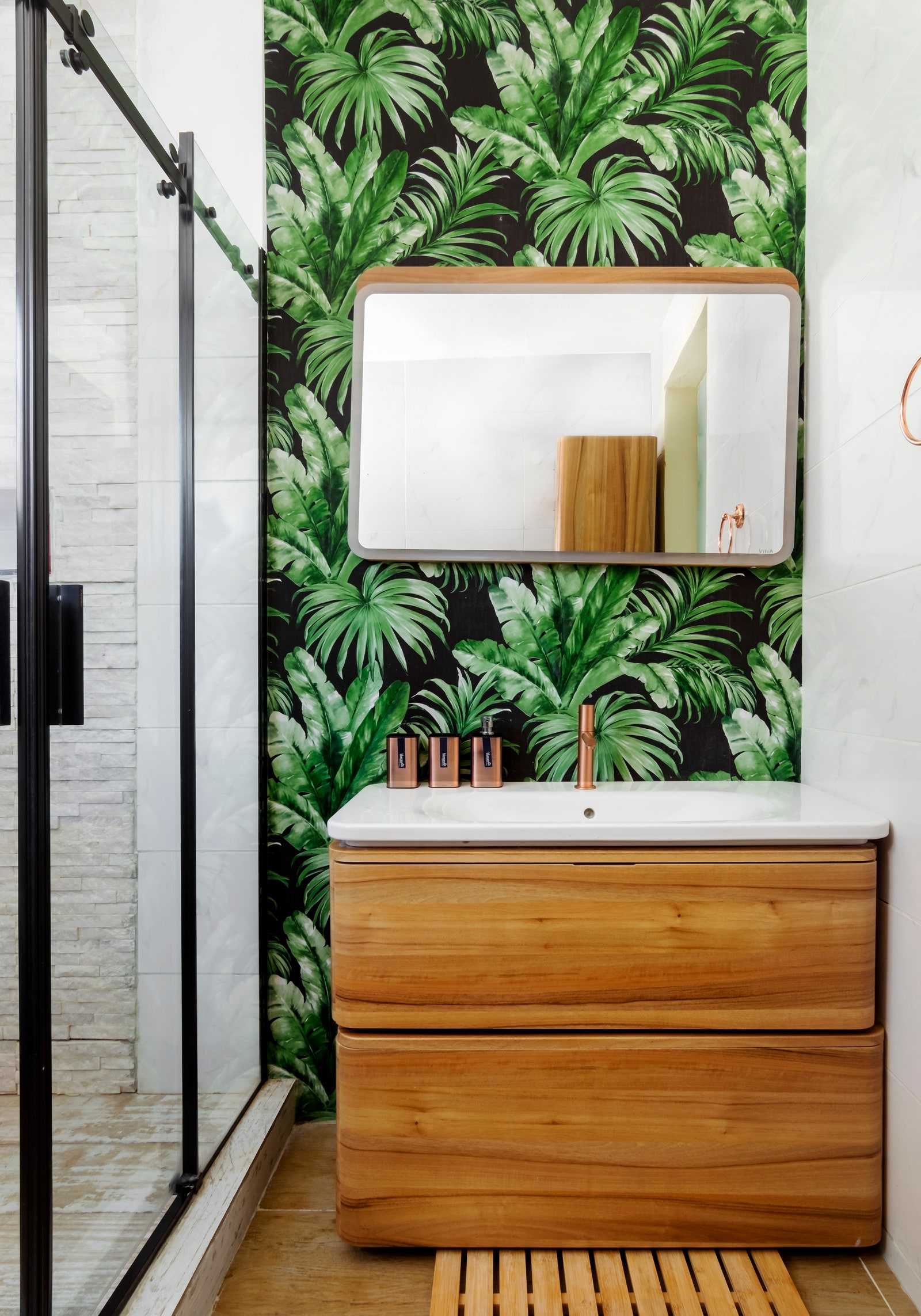 In many of the rooms, lush references to nature can be seen. “Nature speaks to me,” says Burna, who is calmed by greenery. 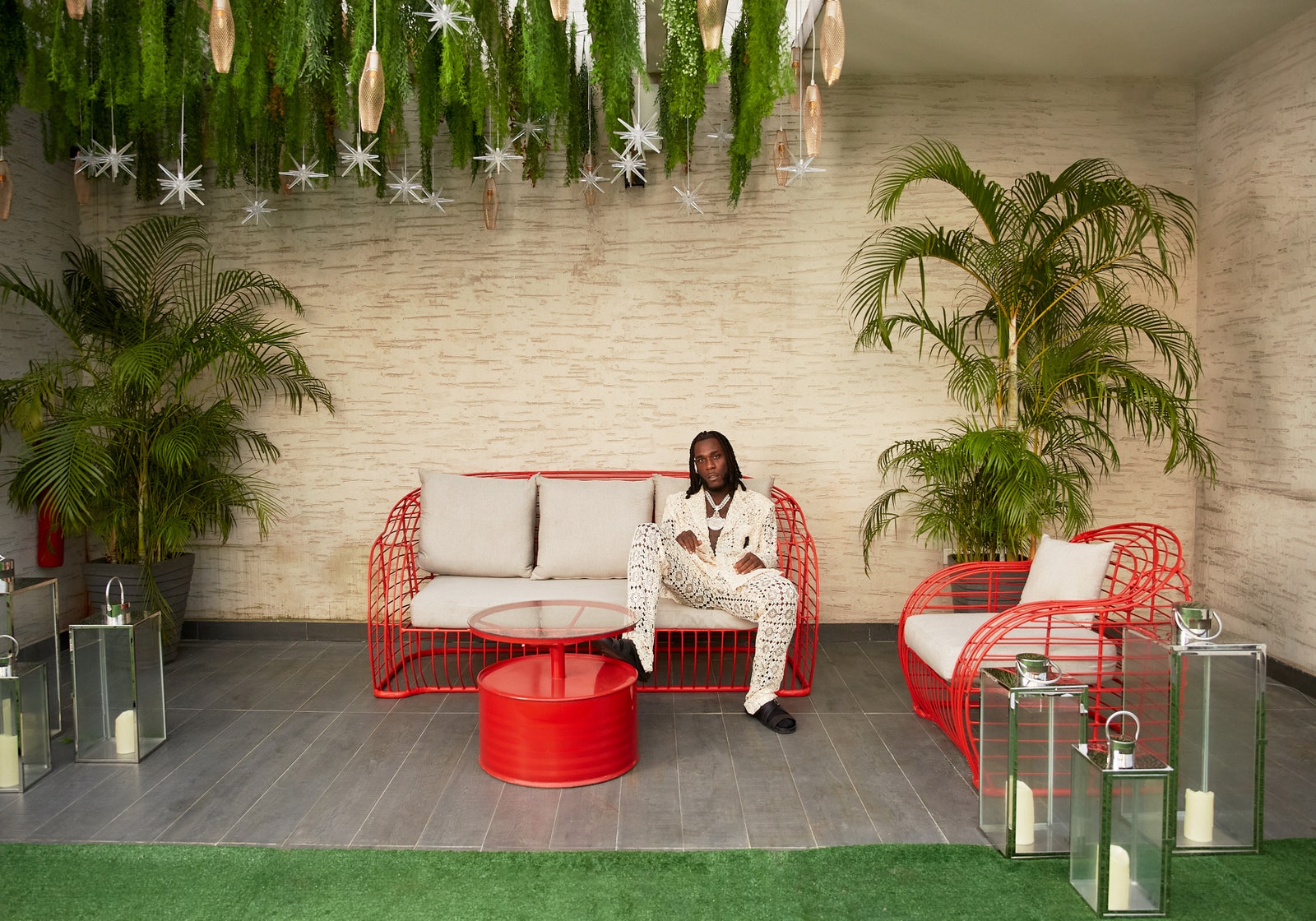 Outdoor lounge areas with eco-friendly up-cycled furniture are de rigueur in Burna’s household. The red oil drum furniture from Atelier 225 in Abidjan, Cote d’Ivoire is a reminder of Burna’s Port Harcourt roots, where crude oil drilling nearby is a daily occurrence. 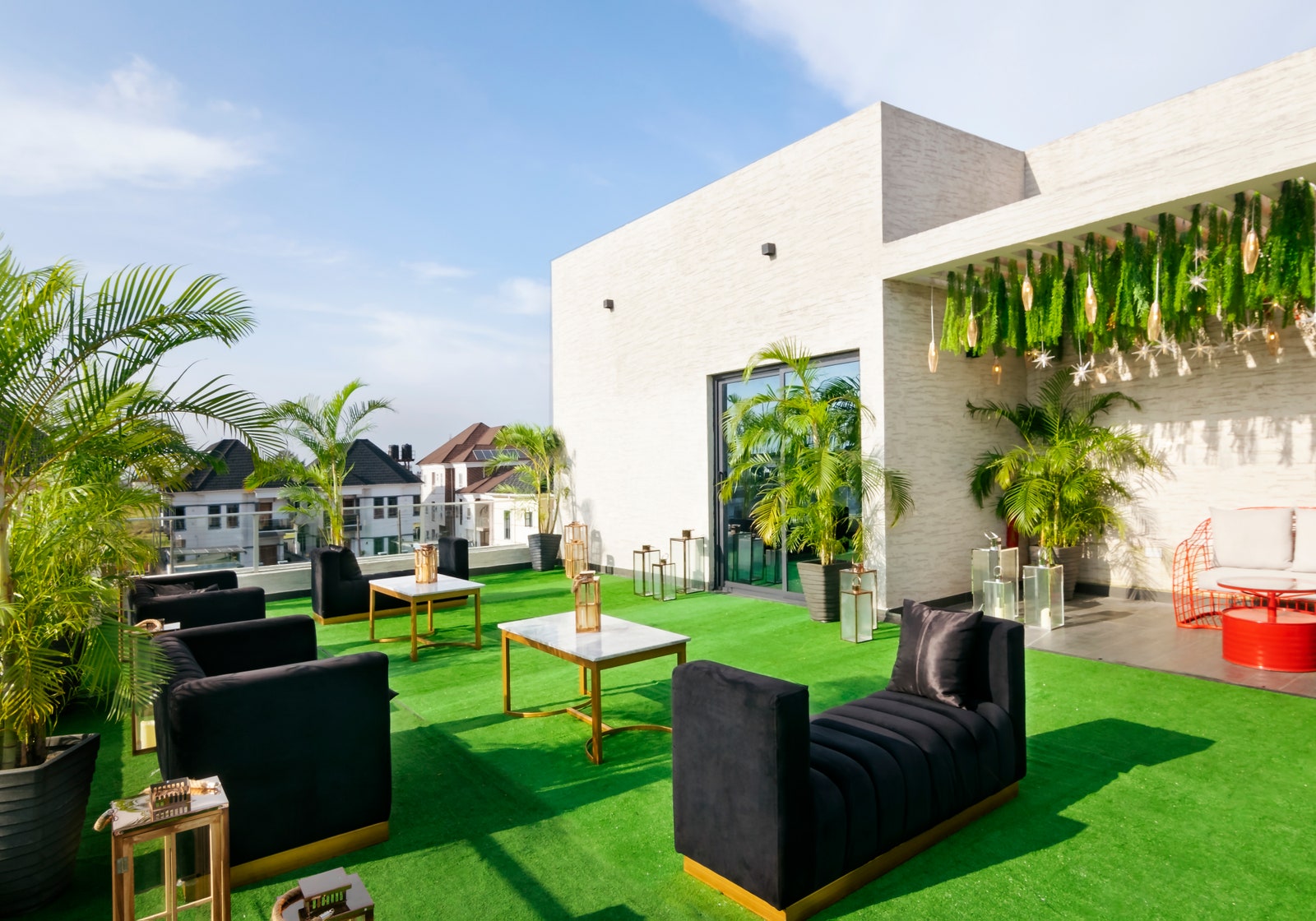 Another look at one of the private outdoor lounges with plants and furniture from Atelier 225. 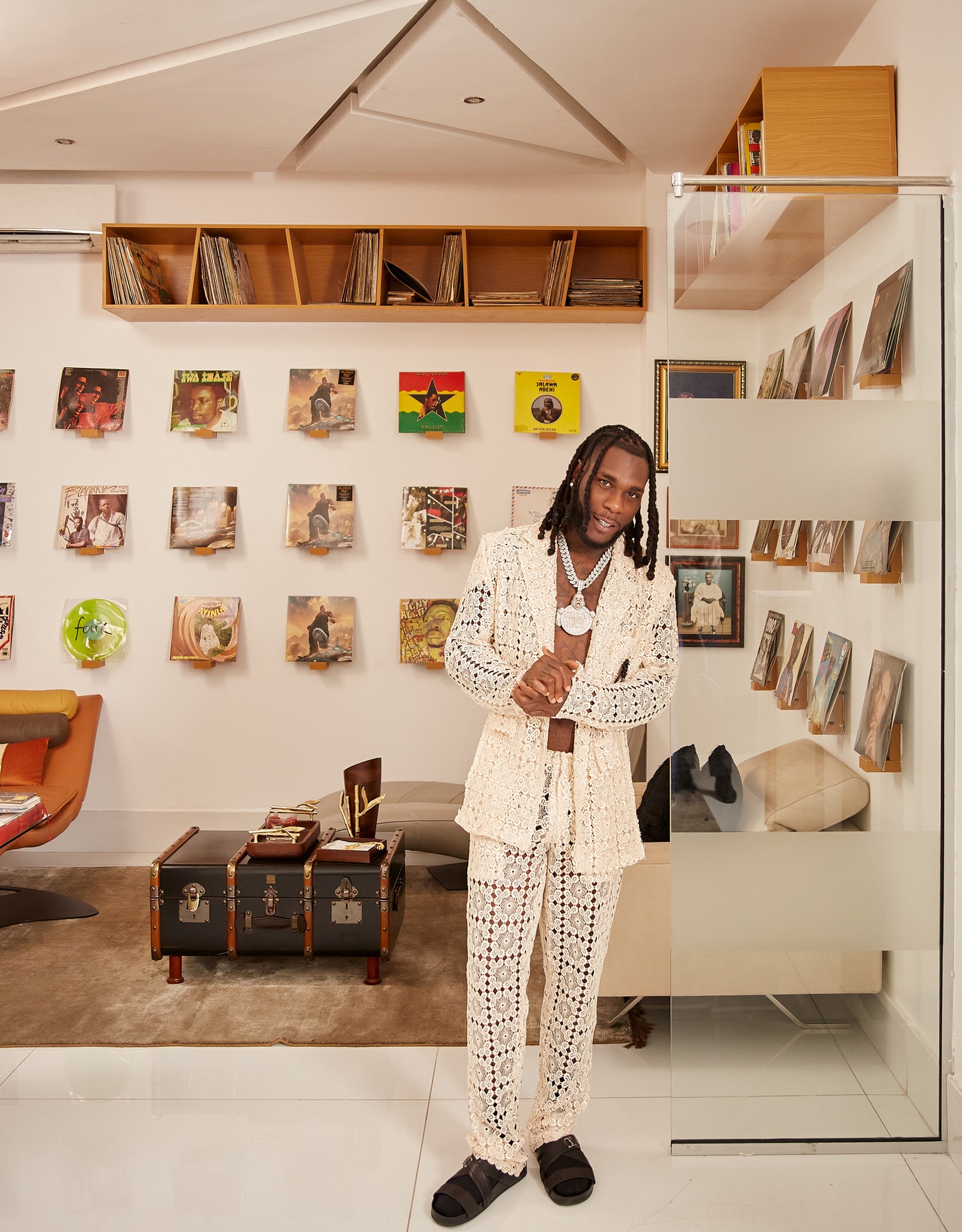 Burna Boy’s favorite place to relax is filled with vinyl records gifted to him by his grandfather, as well as a record player and some family photos. “It’s just the place that gives me motivation and connection to my reality,” the singer says. 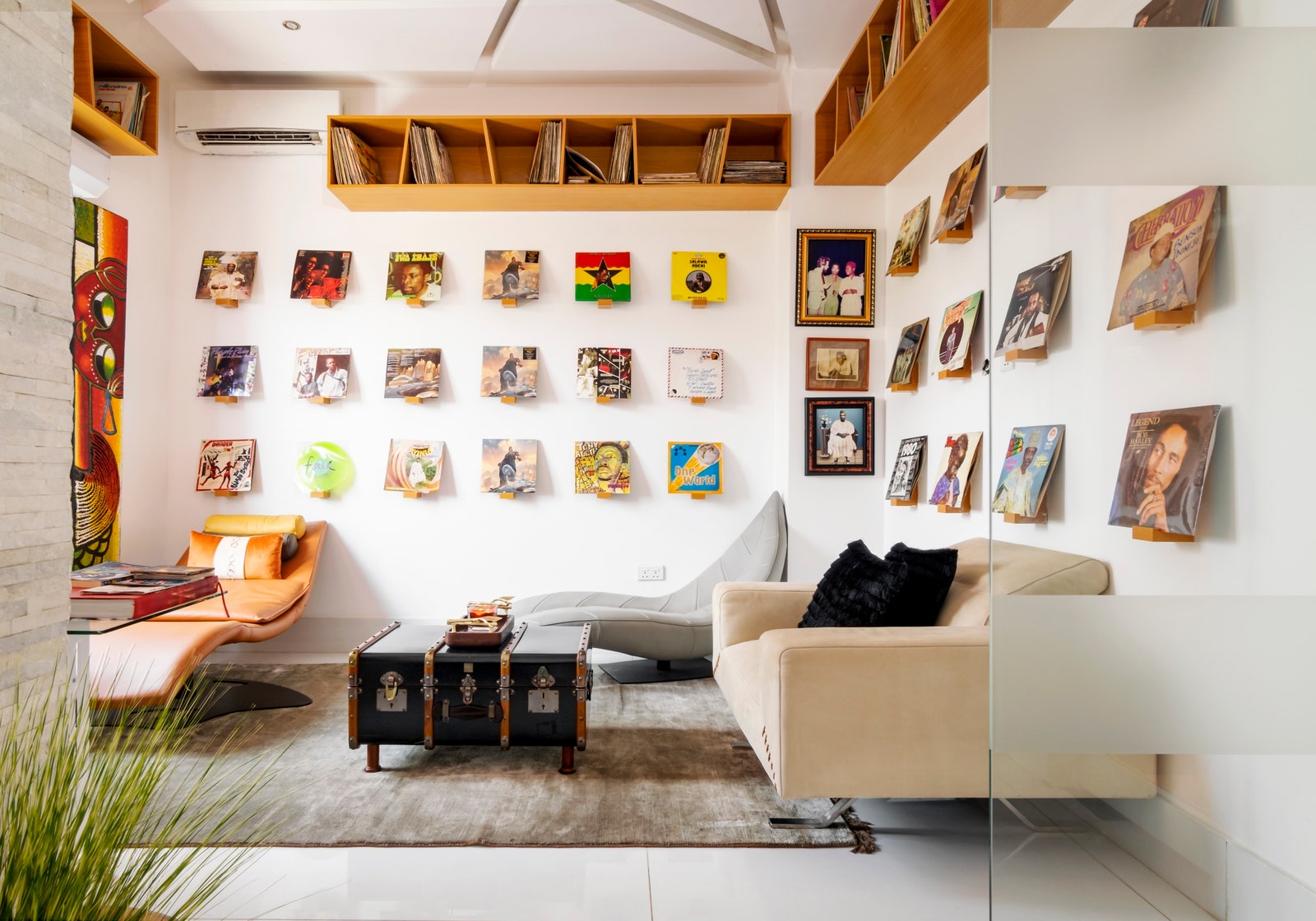 In the vinyl room there is intentionally no television among all the lounge chairs. “You can just immerse yourself by looking at all the [records], and possibly get inspired,” Enebeli says. 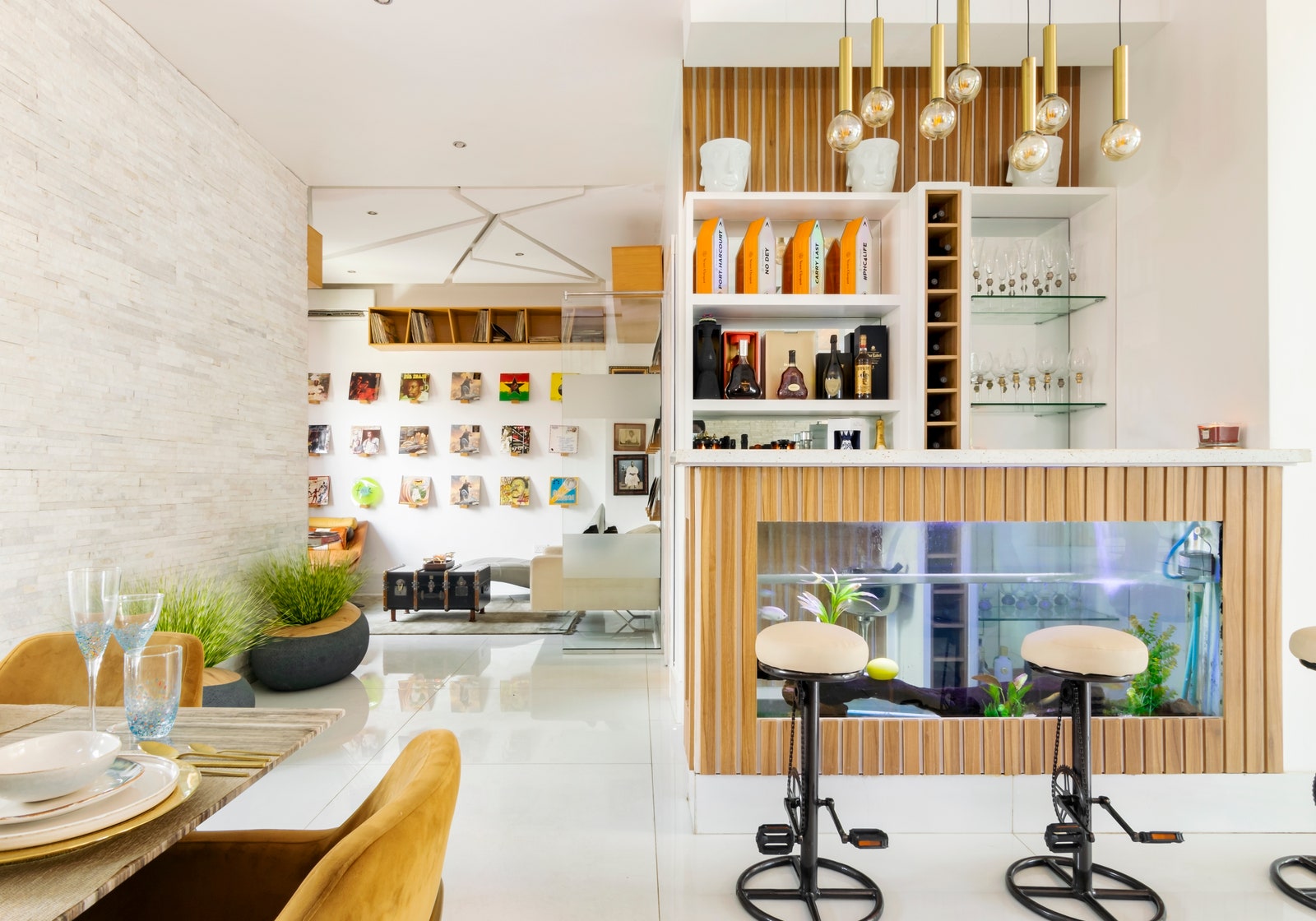 When the lights need to be turned on, pendant fixtures from Precise Lighting in Lagos get the job done. Drinks can be sipped while “pedaling” on barstools from Atelier 225. 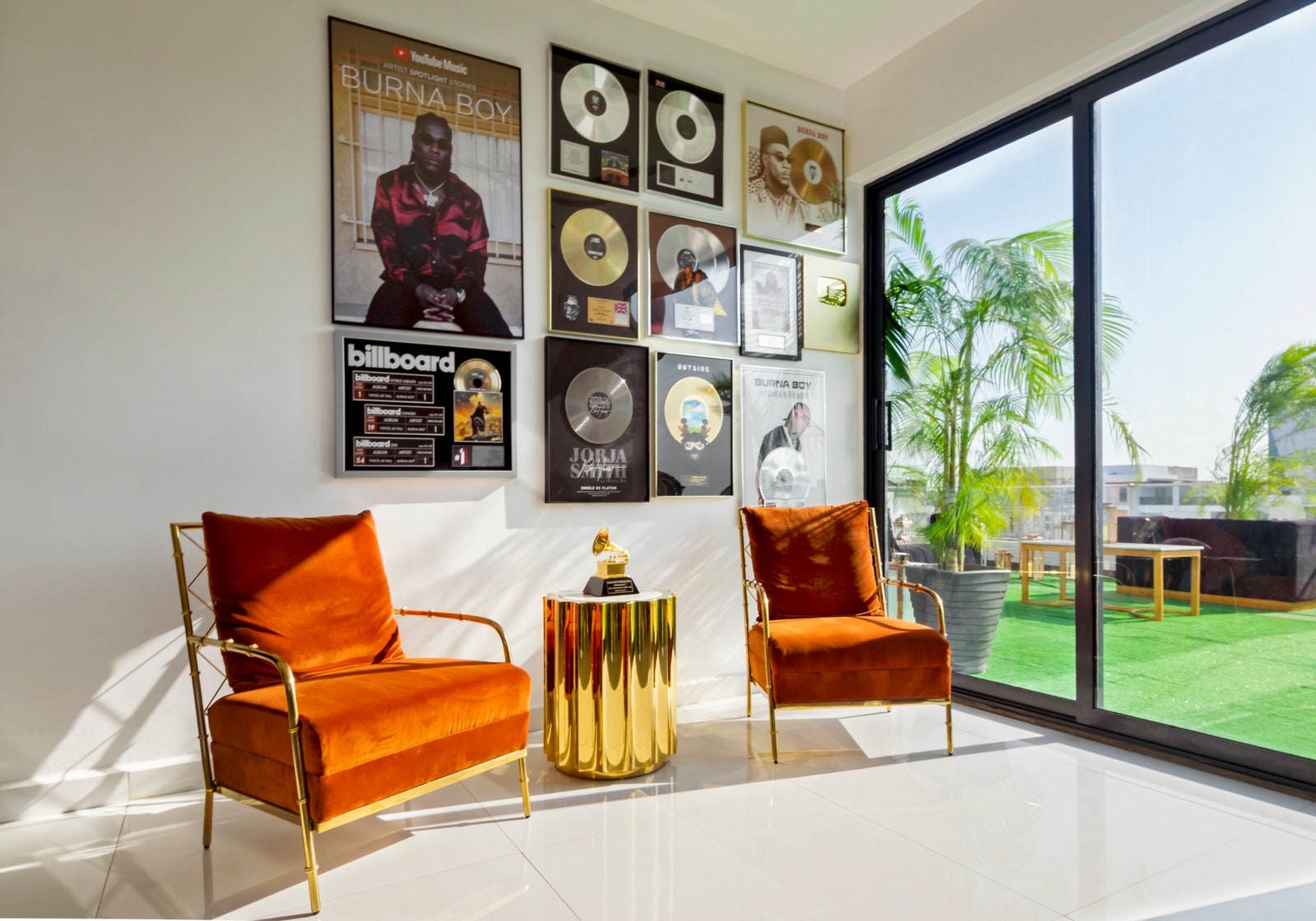 It was in his state-of-the-art studio where Burna’s Grammy Award-winning album, Twice as Tall, was recorded. 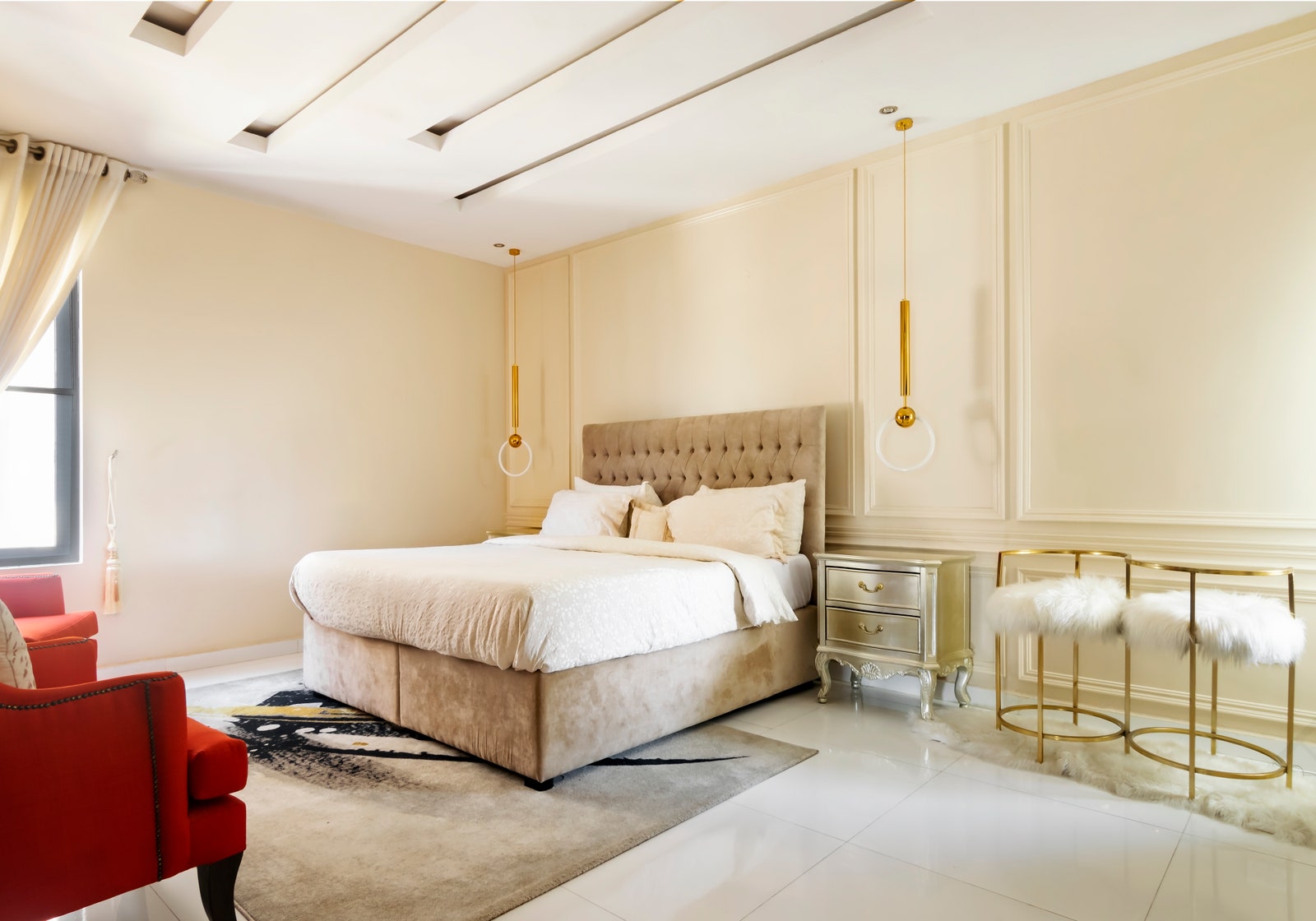 Burna makes new music at home and has two comfortable guest bedrooms at the ready for guest artists and producers who collaborate on his albums. “Burna can go to his studio, record, have his producers around, and feel comfortable without feeling like somebody is around to disturb him,” Enebeli says.

One water-focused request proved particularly challenging for Enebeli and his team at elArc Designs to execute: Burna wanted a swimming pool that started inside the building and then drained outside. In order to make good on the concept, Enebeli built part of the living room so that it would float over the blue-tile pool with a built-in bar. “You have the view from the main living room through the glass, you see the swimming pool, you see the sunken lounge, and you see the large garden,” the architect says. “So you have an outdoor experience, even when you’re indoors.”

As pleasing as the outdoor areas may be, when guests come over to visit they often end up in the vinyl room. It includes a record player and hundreds of records, many of which were gifted to Burna Boy by his grandfather, the famed cultural critic Benson Idonije. Friends listen to classics by Ebenezer Obey, Bob Marley, and Chris Okotie. Burna says it’s a joy to host there because he’s often traveling. Indeed, just this past August, he performed at a sold-out London concert at The O2 arena. Far from home, yes, but not for too long.