From Yolele to Le Grand Dakar to … Julia Child? 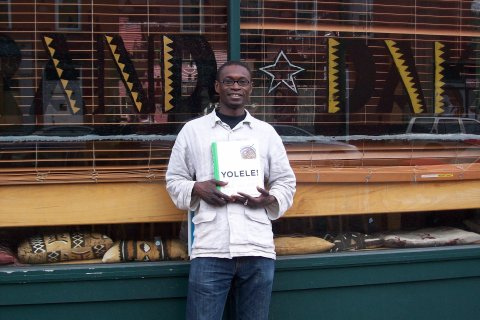 Frankie Edozien
Pierre Thiam, owner of Le Grand Dakar in Clinton Hill, has turned his Senegalese heritage into an opportunity to win a Julia Child award.

That was 20 years ago. And while he has since left the studies behind and made his permanent home in Clinton Hill, he has never let go of his Senegalese roots — so much so that Mr. Thiam, or Gorgui as his family calls him, has taken the skills he learned as a youth and used them to make a significant contribution to American cuisine.

His first cookbook ‘Yolele! Recipes from the heart of Senegal’ was recently nominated for the coveted Julia Child Award from the International Association of Culinary Professionals, making it to the final three out of 400 tomes.

“I didn’t even think about being a finalist, the dream was to be published,” said Mr. Thiam, 44.

Because it is the women in Africa who are in charge of cooking — and it was mothers, aunts, sisters and cousins who passed on their tricks to Mr. Thiam, and who are shown preparing the recipes in the book — Mr. Thiam said there are others who share the credit. “It’s a tribute to all the women in my family,” he said.

After working at SoHo hotspots Jean Claude, Boom and, later, the defunct Two Rooms, where he attracted notice for his infusion of African dishes into the menus, Mr. Thiam set up shop in Brooklyn. His restaurant, Yolele, in Bed-Stuy, was instrumental in making the area a new hub for African cuisine.

Five years ago, he opened Le Grand Dakar in Clinton Hill, a stone throw from the home where he’s been raising three children for the past 14 years. Yolele has since closed. But Le Grand Dakar, with its 1,000-square-foot space and seating for 75, has evolved into a cultural hub. Mr. Thiam’s food is the draw, but on Tuesdays and Thursdays diners are treated to jazz.

Mr. Thiam has also created a Grand Street block party, on Aug. 14, that has become legendary among Clinton Hill and Fort Greene denizens, embodying the definition of the Fulani word “yolele,” which means roughly “let the good times roll” or “let’s play.”

“The idea was to bring an African village outside,” he said of the decision to have African fashion shows, a stage with drummers and more outside Le Grand Dakar every summer.

Mr. Thiam, though, might have something to celebrate much sooner: On April 4, while Senegal is commemorating 49 years of independence from the French, he will be in Colorado where he has a chance to win the Julia Child award.

Such an award would mean a lot to him, he said: In his early days in New York, he spent his free time at the public library reading all her cookbooks. If he wins, he said, he might just “have a Senegalese dance right there.”

Meanwhile the top chef is planning to publish a series of Yolele! books. “I’m focusing on Mali, Benin, and Nigeria,” he said, “and then I’ll leave some room” for other African chefs “to do other things.”