Have Some Art With That Wine 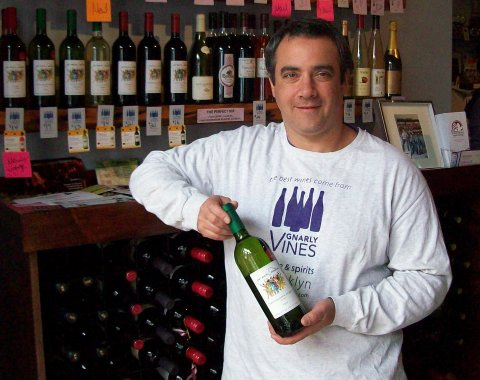 Brian Robinson, owner of Gnarly Vines, has turned his wine shop into an art gallery.

There’s never been a shortage of liquor stores in Fort Greene or Clinton Hill. These days there’s a fair number of places to buy fine wines, too.

One shop that opened about 16 months ago, Gnarly Vines, has figured out a way to do more than keep the wine — and people — coming. The owner, Brian Robinson, has also turned the place into a gallery, where he displays local works of art.

So far 10 exhibits have been up in the shop at 350 Myrtle near Adelphi. And tomorrow a new exhibit goes up, this one by the Fort Greene Photography Organization, a group of amateur and professional photographers.

The exhibit is called “She: A Celebration of Women.”

“It’s Women’s History Month and I wanted a theme that reflects that,” said Ocean Morisset, the founder of the Fort Greene Photography Organization.

How Gnarly Vines came to be the site of a gallery is a tale of shrewd marketing and opportunity.

The area already had several wine shops, including the Greene Grape, on a corner of busy Fulton Street, and Thirst, which opened on a discreet corner on DeKalb Avenue, just steps away from Fort Greene Park.

Gnarly Vines took up a cavernous space on Myrtle Avenue, right across from a liquor store. Mr. Robinson, 42, said he was surprised by the response.

“I didn’t think there would be that much foot traffic on Myrtle Avenue,” he said. “I thought the store would be kind of dead and I would have to make a living by calling up people, by building up a client list of contacts that I would be delivering cases of wine to in Manhattan and Brooklyn, and throughout the five boroughs.

“Because I never thought that the foot traffic could actually sustain the business,” he said. “And it does.”

In fact, there always seem to be folks milling in and out of the 20-by-77 square foot shop, giving it an arty SoHo gallery vibe.

“She” will include works by 12 of the Fort Greene Photography Organization’s 14 members. They feature female spirits, young girls and beautiful women, and will be on display for the next few weeks.

“It’s a great space,” said Mr. Morisset, 40. “I love the brick walls and the environment with all that wine.”
To comment click here